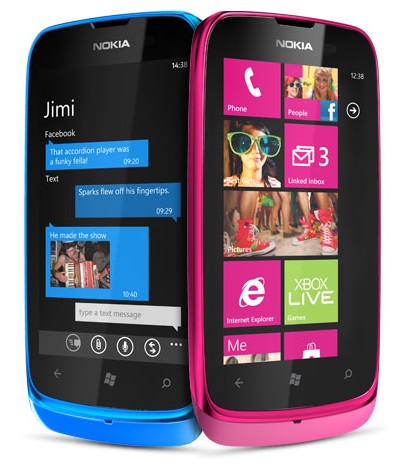 Nokia Lumia 610 is the latest addition in the “Windows phones” lineup of the company. The phone has been launched with the Windows Operating System. The phone has the 800 MHz ARM Cortex-A5 processor and Microsoft Windows Phone 7.5 Mango OS. The camera has the quality of 5 MP which comes with the LED flash. The phone has the 2G, 3G and the Wi-Fi connectivity.
Nokia Lumia 610 comes with a 3.7 inches TFT capacitive touch screen. The video zoom of this phone is 3x. All the features and specifications of Nokia 610 Lumia have been given in this article.

Design
The design of the phone is quite attractive. The dimensions of this phone are as follows:
Length: 119mm
Width: 62mm
Thickness: 12mm

The front of Nokia Lumia 610 has the 3.7 inches display with the 480×800 pixels resolution. The phone supports 65K colors display also. The phone’s display has been made up of the corning gorilla glass material and also has the multi-touch feature.
There is a sensor on the top of the phone and the speaker is in the middle. The three buttons are also placed under the display viz. Back, Menu and Search buttons.

The rear part of the phone features a 5 MP camera with the speakers at the bottom. There is also an LED flash besides the camera.

The left side of the phone has been set free. There is no button or key provided on this side.

The right side of the phone has the volume Rocker button, a dedicated camera key and the Lock/Unlock key to lock or unlock the display which can also be used to switch the device On/Off by pressing it continuously for 3-4 seconds.

The top of this phone has the microUSB port (charging). There is also a 3.5 mm audio connectivity jack on the top. There is no key or button on the bottom.

Memory: The device comes with 8GB internal memory. There is no microSD card slot. The phone is provided with 256 MB RAM.

Performance: The device performs average with 800MHz processor and chipset of Qualcomm MSM7227A Snapdragon. 256MB RAM is sufficient to do all sorts of work on the phone. The device performs well with music play, supporting other general applications. It cannot be used for heavy apps as there is poor screen resolution. The camera quality of the phone is good. Moreover, the connectivity services of the device are well desired by a user.

Camera: The camera of the phone is 5MP in size and the camera has LED flash. It has 2592×1944 pixels resolution. There is no secondary camera in this phone. The phone comes with the autofocus and the LED flash support.
The camera is able to capture the 720 pixels videos @ 30 frames per second. The phone has the geo-tagging feature.

Conclusion: Nokia Lumia 610 price is affordable and it comes with some good features. But, as Nokia’s OS does not support Android version. So, it is a drawback as the users are giving priority to Android devices now a days. However, you can buy it to have fun with the gaming apps.

OMG ! What Unbox Therapy has said about iPhone 6

One of the most popular gadget technology website Unbox Therapy has said something about upcoming iPhone generation mobile that has totally shocked the iphone...
Read more
Mobile Reviews