Teenage Girls Love to Talk these 7 Things in Daily Life

Adolescence is very well known as teenage. There are several changes occur in a person’s life in this age whether it is physical or behavioral change. Every teen dreams big things for him/her in future between 13 to 19 years age. Girls also dreams in this age just like boys do. A girl usually talks more than boy. Gossiping is always in girl’s nature.

A girl has lots of things to talk each and every time. Let’s find out some basic things that teenager girls love to talk on daily basis.

Shopping and girls both are co-related to each other. They know where 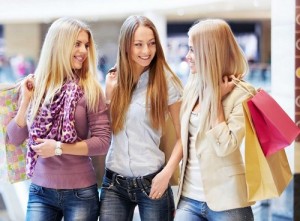 the sale is and which shop, portal is providing them best deals. They also look to shop clothes, make up ornaments and fashionable things. Whenever a girl meets to her friends she never forgot to gossip about her latest purchase and also advice other to shop as well.

Every teenager is crazy about a celebrity. Not even they are crazy but they feel they are in love with their star. Girls are attracted to celebrity’s muscles, smartness and looks. Whenever a girl meets to other girls she is used to talk about her favorite celebrity to whom she likes and loves. She never forgets to show her madness for the star.

Not only teenager but all age girls/women love to do makeup. In teenage girls are more crazy and they always keep a mirror, comb, lipstick and other make things in her bag while they are outside home. They are much concentrated towards looking better than her friends. In this age girls are much serious about her looks. They always see themselves in the mirror and keep on saying nobody looks better than you.

Girls are more concerned about their health and body weight in teenage. It doesn’t matter whether a girl is thin or healthy she always looks to reduce her weight. She hates to see any kind of fat around her stomach and belly. Teenager keeps talking with her friends about what to do for reducing the weight. She makes a diet plan and always follows it to reduce her weight and looks better.

Well attraction towards opposite sex is natural especially in teenage. Girls love to talk about their boyfriend, crush, ex-boyfriend or any other guy to whom she believes her man. Eventually talking about buys is one of the main topics girls have in this age to gossip. A teenage girl share her boyfriend’s habits and likes with her best friend.

We have already discussed that teenagers are crazy about celebrities hence they are much attracted toward the films as well. They like to take about their last weekend’s movies that the

y had watches and also discuss plan to go for next movie. If girl has boyfriend then she tells her friend about the last movie that she has watched with her boyfriend.

When a girl feels bore she likes to listen music. At times she also selects one special singer to listen his songs. Girls keep talking about the celebrities who arrive recently in their city. They listen music to keep themselves fresh as well.

It is quite interesting but it is a fact that girls love to talk about themselves and they praise themselves in front of the people. Sometimes a girl also discusses how she can improve her looks to get attention from boys. She always searches better things for her to make herself unique from crowd.

These are some daily routine topics of girls that they like to gossip. If you have any other topic that a girl includes in daily life for talking you can share it in comments.