As a mark of respect to veteran actor Vinod Khanna, who passed away earlier today, the producers of Bahubali 2:The Conclusion have decided to cancel the Thursday night premiere of the film.

The 70-year-old actor was battling cancer for a long time and breathed his last at a Mumbai hospital this morning. He was recently hospitalized after his health took a backseat.

The makers released a joint statement to annonce the cancellation. “We are deeply saddened by the loss of our beloved, the legendary Vinod Khanna. The demise has come as a huge shock to all of us. As a mark of respect for our dearly departed, the premiere event of Baahubali: The Conclusion is now cancelled,” the note that was signed off as “Love and remembrance, Karan Johar, SS Rajamouli and the entire team of Baahubali”. 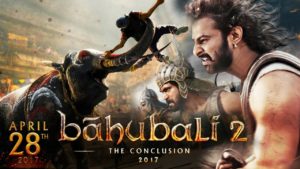 The producers had planned a grand premier for the film. Just like the film, the event was also planned with grandeur. Special invites were also sent out for the same.

Karan Johar took to Twitter to extend his prayers to the actor’s family and fans. He wrote,” His screen presence is unparalleled even today … his super star swag is what we grew up on … RIP #VinodKhanna … thoughts and prayers …”.

Announcing the news about the actor’s demise, the hospital said, “Veteran actor and Member of Parliament Mr. Vinod Khanna, who was admitted to the Sir HN Reliance Foundation Hospital breathed his last at 11.20 am due to advanced bladder carcinoma.”.

People, incuding Bollywood stars and sports personalities, have been condoling the death of the four-time Member of Parliament, who ruled the box office in the 80’s.

As the advance booking for tickets to S.S. Rajamouli’s ‘Bahubali-The Conclusion’ was opened – online since Tuesday and at the Box Office counters at single screen theatres and multiplexes from Wednesday, the clamour for tickets appear to become a roar.

While numbers were not forthcoming, the craze among film buffs to know about why Katappa killed Bahubali this Friday was evident from the queues at Box Office counters. Tech-savvy connoisseurs of films were feverishly browsing different websites selling tickets online right through Tuesday for the multi-lingual.

” It is clear that people, especially film buffs want to be among the first to tweet the answer to the single question about Katappa murderous act, said Shankar, working in an IT company. Anyway, the answer will be known when over a dozen single screens and multiplexes project shows from 8.30 p.m. on Thursday itself, he went on to add.

None connected with the production and distribution of the film, whose part one – ‘Bahubali-The Beginning’  box office collection grossed over Rs. 600 crore when it was released in 2015, were available to give out details of sale. Those in the industry felt the ‘over-hype’ given to the film in the manner of a well-planned strategy led to the craze peaking.

BookMyShow, a large online entertainment ticketing platform however, on Wednesday evening stated that it had sold a million tickets in just over 24 hours since Tuesday, a full two days before the release of ‘Bahubali-The Conclusion’ in. The record was earlier held by the Aamir Khan-starrer ‘Dangal’, said Chief Operating Officer of BookMyShow, Ashish Saksena.

Closer home, across the twin cities, there were reports of widespread black-marketing of tickets. In a press release, Commissioner-Commercial Taxes (Telangana), V. Anil Kumar said it had come to notice that some theatre owners across the State were collecting higher amounts than the notified ticket rates.

Asked about the permission accorded to single screens to project an additional, 5th show every day, Minister for Cinematography, Talasani Srinivas Yadav said, “We acceded to a request from the producers of ‘Bahubali 2’ for single screens alone. Multiplexes already have permission,” he said, pointing out that earlier, tax exemptions were given to films like ‘Rudrama Devi,’, Balakrishna-starrer ‘Gautamiputra Satakarni’ and ‘Brahmotsavam’.

The Minister said that Government of Telangana would encourage films and dole out sops, only based on the historical and educational nature of the content, on a case-to-case basis,” categorically denying any favouritism being alleged.

Rajesh Jathttp://thewebend.com
"Be Human, Love Nature" I am a SEO Professional from India.
RELATED ARTICLES
Entertainment