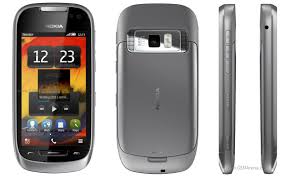 Nokia has launched its new smart phone, the Nokia 701, complete with a Symbian Belle operating system and a brilliantly lit screen along with many other features at a competitive pricing. So, is this new toy from Nokia’s stable worth it? Let’s find out in the review of Nokia 701.

When it comes to looks, Nokia has not been its usual innovative self of late. In this model also, nothing new has been added as its design has been kept pretty much simple and rounded, though admittedly the metallic slim alloy body adds a pretty good level of attractiveness to it.

But the most catching feature of Nokia 701 is its well lit 3.5” IPS-LCD display, the next gen ‘Clear Black’ display, which seems to be around 3-4 times than the regular ones. The new Clear Black display offers a 160 degree viewing angle, though with a trifling loss of contrast while tilting.

The operating system being used in Nokia 701 is the Symbian Belle, which is being considered much of an improvement over the previous smart phones by Nokia. However, the size and shape of the icons are pretty much identical and therefore, they may make operating Nokia 701 a bit harder or confusing. Also included is a somewhat basic ‘Voice Recognition Control’ that can execute an array of commands, like changing profile or accessing Radio etc. Plus, its 1 Ghz CPU and 512 MB RAM provides a very decent processing power.

All in all, being priced at around Rs. 19,000/-, Nokia 701 seems to be a considerable option if you are planning to break away from Samsung or iPhone or Android OS.

So, what do you think of Nokia 701 smartphone. Did you liked it or not? Share your thoughts in the comment box below.

Nokia Lumia 610 is the latest addition in the “Windows phones” lineup of the company. The phone has been launched with the Windows Operating...
Read more
Mobile Reviews

Contabo Web Hosting Review : Everything You need to Know

Contabo is a German web Hosting business created in 2003 under the name Giga International. In 2013, the founders...
Read more

4 Simple Tips For A Healthy Relationship

Meeting someone new and starting a relationship can be very exciting as you get to know one another and develop feelings. Butterflies...
Read more

Krishna Janmashtami 2021 : The Lord Krishna’s birthday is distinguished as the festival of Janmashtami and it is celebrated with full of...
Read more
Load more