How to Change a Scroll Saw Blade – Step by Step Guide 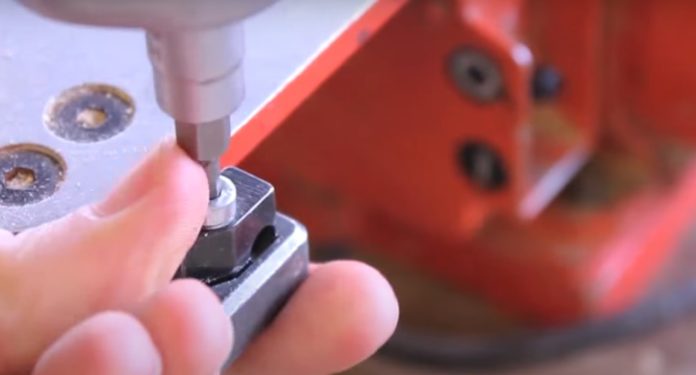 Installing or replacing the blade in the saws could become a bit of the extensive work, if you don’t know the drill. Therefore, knowing your saw and learning changing scroll saw blades by itself is a skill which every scroller must obtain.

Thus, without any further due, let us dive into the topic and learn how to change scroll saw blades?

How To Install A Blade On A Scroll Saw: A Step-By-Step Guide:

The very first step in order to change the blades of the scroll saw is to thoroughly go through the user manual of the scroll saw provided by the manufacturer. As such, it will make you job changing experience of the blade quite easy.

The upper arm is the topmost portion of the scroll saw that is attached with the upper blade at the forward end of the arm. Other major work that upper arm does that it supports the blade guard attachment in order to keep the user safe. Accessories like sawdust blower or work light can also be attached on the upper arm easily.

As the name suggests, the lower arm is located beneath the worktable. The main objective of the lower arm is to drive the saw which is attached with the motor in order to reciprocate the blade in upward or downward direction.

In the fore end section of the lower arm, the lower blade mount is also located.

A tensioning device is one of the crucial part of the scroll saw, as such it would create a required amount of tension on the blade between the upper arm and the lower arm.

If in case, the amount of tension on the blade is not as per the requirement then the blade would wander, vibrate or would even break sooner.

The blades of the scroll saw are majorly categorized in two types, the first one is pinned while the other one is painless.

The pinned blades have a small circular pin that is fitted in the crossways with the help of the top portion of the blade at the right angle in order to cut the material. While on the other hand, the painless blades have a smooth end which helps them to slip into the blade clamps.

The blade clamps can be tightened with the help of the wrench or the thumbscrews.

Nevertheless, installing the scroll saw blade is majorly dependent on the type of the blade that is used in the sawing process. The blades are generally made as per the saw, therefore understanding the basic method of installing scroll blades is necessary.

The basic method of replacing the old scroll saw blade with the new one is as follow:

To sum up, it is very important to know the blade used on the scroll saw to achieve a easy and enjoyable job without even breaking the blades that will surely put a halt on your nearly finished project.

Thus, always pay attention on the quality and fitting of the blade to make your day to day job easy and hassle free.

Rajesh Jathttp://thewebend.com
"Be Human, Love Nature" I am a SEO Professional from India.
RELATED ARTICLES
How To

iBOMMA is a very popular torrent website that enables the user to download as well as stream the movie. It is a...
Read more
How To

Getting the right people to use your products is important. As you start to scale up, you'll no longer be able to...
Read more
How To

In today’s world, it will not be wrong to say that people are born and raised on the internet. As a part...
Read more